After 2 years of long hair + beard it’s time to switch things up. When we perceive our environment, it is we who invent it.

Piagett’s central point was that you need the moratorium to understand the sensorium. [Prefigures active inference.]

In neocybernetic theory, the form/substance dichotomy is superseded by the distinction between form and medium.

Forms are temporary fixations of elements within a medium, and when enough like forms coalesce, they become another medium for a new, emergent set of forms.

The strong constructivism of neo-cybernetic systems theory deals with the world by promoting a new level of attention to the media of its forms or, more concretely, to the environments and the embodiments of systems.

Emergence [is] a movement from the chaotically complex to the manageably complex.

This is how one constructs a reality: an observing system S, a necessarily self-referential form, creates epistemological space for itself by reentering the virtual form of its own bounded distinction from the environment B/E into itself as the virtual border b/e, which it then can make use of to distinguish between self and other.

Every discrimination is inherently a process, and the structure of our world as a whole comes from the relationships whose exploration constitutes that world. It is a reflexive domain. There is no place to hide in a reflexive domain, no fundamental particle, no irreducible object or building block. Any given entity acquires its properties through its relationships with everything else.

Aristotle views the soul as the capability (“first actualization”) of living beings to perform the functions of living. That is: the soul is the form of the body, which is matter. The two cannot be separated.

Waste doesn’t just mean material, but time and labor as well. The trick here is to look up how someone else already did it well.

Bought two plants today for the start of my collection. :) There was a beautiful braided ficus alii that would make a perfect “canopy” plant, but I didn’t want to spend $200 quite yet. I think the first order of business is making cutaway planters. Think seeing the roots is going to be really cool!

One of the things I struggle with in gardening is figuring out how wet my soil is throughout the planter. A cool woodworking project would be a planter bowl with a acrylic cutaway that allows me to see the roots & soil.

Basically like this, where the grey face is transparent: I love how bonsai invokes the feeling of a tree on a miniature level. What is like to do with my gardening + woodworking project is invoke the feeling of a forest or jungle. The idea would be to have one or two “canopy” plants covering smaller plants. Like this for the canopy: 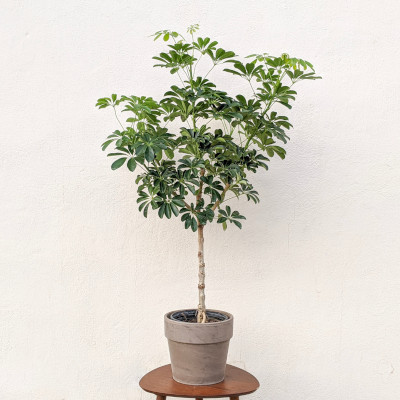 And this below it: Think that’d look neat. I’m deciding between having the plants separate on a bench vs. having them all in a trough planter. For aesthetic purposes the trough would really pull things together. Could add some moss… But for practical purposes I’m uncertain how I’d move it in and out of my place!

This weekend I took Woodworking 2 and 3 classes at Maker Nexus. In Woodworking 2 we built bullroarers (left item). First, we split a block lengthwise on the larger bandsaw. Then we honed down the shape using a smaller bandsaw. On a disk sander we smoothed the shape, then created an aerofoil effect through careful sanding at an angle. That 3D shape was further worked on through handsanding. An opening for the string was created on a drill press. Spin it on the string and you get a nice loud wooshing sound.

Woodworking 3 was entirely on routers. We used a table router to create a nice edge on a board, then a slot. On a second board we routed out a slat to form a joint. That’s the right item. We also used a hand router to form an edge on a larger board. Apparently the technique is super versatile, the instructor recommended taking a look at YouTube videos.